Well, you might believe it. They mostly just gave advice on how to design websites. But the thing which I found absolutely fascinating in these books is the way they gave that advice. In fact, we found this style of writing so interesting, we wrote a paper about it, which is now available.

But before I go into that, I want to explain how I ended up reading 17 old web design books. In the summer of 2020, my advisors and I conducted a series of interviews with experienced web designers as part of our investigation into the history of web design. One of our participants graciously went through her bookshelf and talked about all of the old books she used to learn design principles.

We noticed as we analyzed our results that our other participants were often mentioning books as well. Why? Well, in the words of one participant “We don’t really do books anymore. But back in the day that was the only thing. We, I mean, there was stuff online, but it was really all about books.” As the web was growing, people couldn’t learn web design from websites or classes like they do today, they mostly learned them from books.

Anyway, I spent the fall and winter of 2020 tracking down and reading as many of these old web design books as I could. As a result, this is what my desk looked like for most of these months: 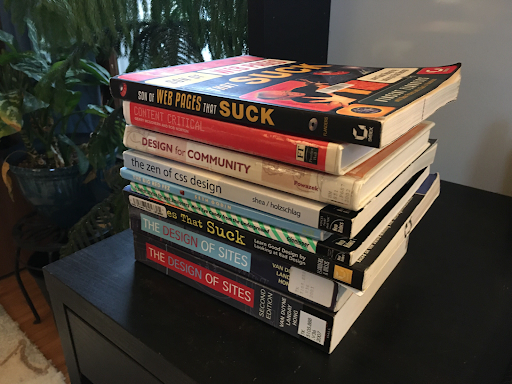 So what exactly is the style of writing used in dot-com era web design books? We found five trends:

So why in the world are authors writing about the web this way? We think there are two related explanations:

Implicitly, by writing this way, these authors are taking part in the construction of what it means to be a web designer, who gets to claim that role and how web design relates to other disciplines like art, design, software engineering and marketing. For better or worse, we are living with the consequences of that culture today.

Anyway, if these topics interest you, you should read our paper! We have a lot of analysis and connections to theory (including translational HCI, secondary orality and hegemonic masculinity) that doesn’t quite fit in a blog post like this and some recommendations for how we should teach new design disciplines in the future.